My wife’s a travel writer and covers Hawaii extensively, and one of the considerable perks I enjoy by virtue of being married to her is the ability to tag along on some of her work trips. And so it was that I found myself on Maui last weekend during the Maui Oceanfront Marathon festival of races. There were quite an array of races all happening on the same day: a marathon, a half marathon, a 15K, a 10K and a 5K. The half and 10K were on  an out-and-back course starting and finishing in Lahaina, and the rest were point-to-point affairs, requiring a shuttle bus to get to the start. All races finished in the same place in Lahaina town. We were staying up in Napili, right next to the Kapalua resort, which made my choice of the half work pretty well logistically.

Not that I had bothered to bone up too much on the logistics – this was strictly a “fun race,” an early season test of running fitness. I was hoping to go under 1:25, or just slightly faster than 6:30 pace. We’d had a nice dinner at Merriman’s Kapalua the night before, complete with wine pairings, which I heartily recommend — other than perhaps the night before a half marathon. 🙂 Woke up to some slight GI distress, which I won’t go into detail on, but I wasn’t feeling that race ready.

Got to the start line at 6:25 a.m. in plenty of time for a 6:45 a.m. start. However, it turns out that the start was at 6:30 a.m. (did I mention I hadn’t paid too much attention to the logistics?), so I jumped in near the front of the field and figured I’d do my warmup in the first mile. The horn sounded and we were off.

I was running pretty relaxed, and in the first mile I was probably in about 10th place overall. I knew that there was at least one other race going on at the same time — a 10K — but I wasn’t sure if there was a 5K as well. So you really couldn’t tell who was in which race. Plus it was pretty dark out at that hour — I ran with my sunglasses in my hand until there was enough daylight to put them on.

I started reeling in runners after mile 1, which I passed in a somewhat leisurely 6:35. The first female was my first passee, then I came up on a group of three guys running together. I went past them and surged as I did, just to discourage anyone from sitting on my wheel. One older guy in a “Yukon” singlet did sit on, then surged past me, which I thought was an interesting move, so I tucked in for a little while. Mile 2 was 6:19, so the surging had definitely picked the pace up. I was trying to stay relaxed, though — there was still a long way to go.

“Yukon”‘s breathing was pretty labored, and I could sense him slowing, so I surged past him again, this time for good. Next up ahead were three other runners, and I was starting to close in on them. I hit mile 3 in 6:27 (there was a bit of uphill in that mile), and all of a sudden, the three runners 20 yards a head of me turned at the 5K cone. I thought I was supposed to go on for another 3.5 miles to another turnaround for the half, but the road ahead of me looked closed — there were red cones lined up on the shoulder. So I second-guessed myself and thought that maybe it was a two-lap out-and-back course or something, so I turned back around to follow the others.

I had lost some ground to them during my hesitation, but started reeling them in much more quickly. Mile 4 came in 6:22, right at the point I passed a guy in a Laguna Niguel singlet; then all I could see were two guys together right up ahead of me. I went past them pretty quickly, and now there were only runners coming the other way on their way out. One woman high-fived me and said I was in the lead. That didn’t seem quite right, but I was just focused on staying relaxed and dealing with occasional rumblings from my gut — nothing severe, but I was a little worried about them in the second half of the race.

I hit mile 5 in 6:25, so I was still on goal pace, and behind me I could hear someone coming up on me. It was one of the last guys I had passed, and he looked as though he was making his finishing surge in the 10K. He pulled even with me, and I looked at him and gave him a “good job” nod before letting him go — I still had 7+ miles to go.

Or so I thought. As I came up to the start/finish line, it appeared that there was only a finish chute, not a place to turn around and go back out, and furthermore I was being announced as the 2nd-place finisher! The official time was 40:24 — not the 10K time I would have liked on my permanent record, but oh well.

At least I got to get first dibs on the free post-race massage. 🙂

Lesson for the day: if you can’t be bothered to read the race instructions closely, don’t get bummed out when things go awry. Besides, as one of my friends pointed out, “you’re still on Maui after all.” 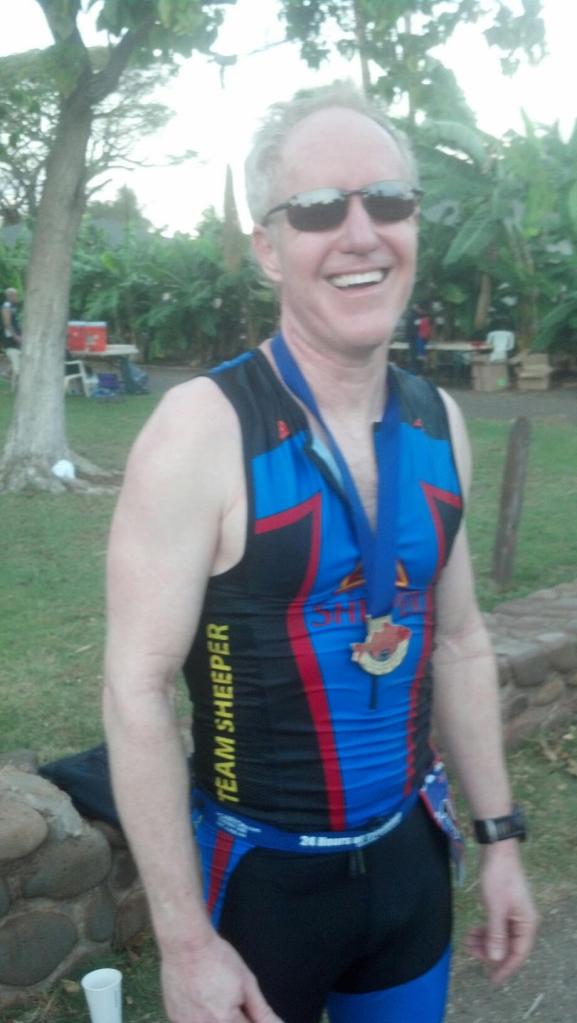