My binge-racing campaign of 2014 continued with a trip to Milwaukee for the USA Triathlon Age Group National Championship in the Olympic distance. It’s relatively straightforward to qualify for this event – finish in the top 10% of your age group in a sanctioned race – but the event itself is anything but. Like Kona, it’s similar to my freshman year at Rice, where I had to adapt to being a small fish in a big pond – going from being at the top of my class in high school to being one of many who had been at the top of their classes in high school.

But blows to one’s ego aside, it’s good to face tougher competition – it tells you where you really are. So I stood ready to take my licks, especially at a distance that doesn’t really play to my strengths. The problem for me at the Olympic distance is the swim: it’s barely shorter than the swim at a half Ironman, but both the bike and run are less than half the distance, so I don’t have as much ground to make up time on the really fast swimmers – I run out of “real estate.”

On the other hand, the Olympic distance is fun! You don’t have to worry about nutrition or even pacing that much – you just go hard for 2ish hours. The key for long course athletes is to be able to go into that higher-intensity zone; to that end, a group from my team had been organizing a weekly tempo run to force us to push into that uncomfortable zone for a sustained period.

Milwaukee turned out its best for the weekend: spectacular weather and a nice race venue, with the bike course completely closed to cars. Registration and bike checkin were a breeze. 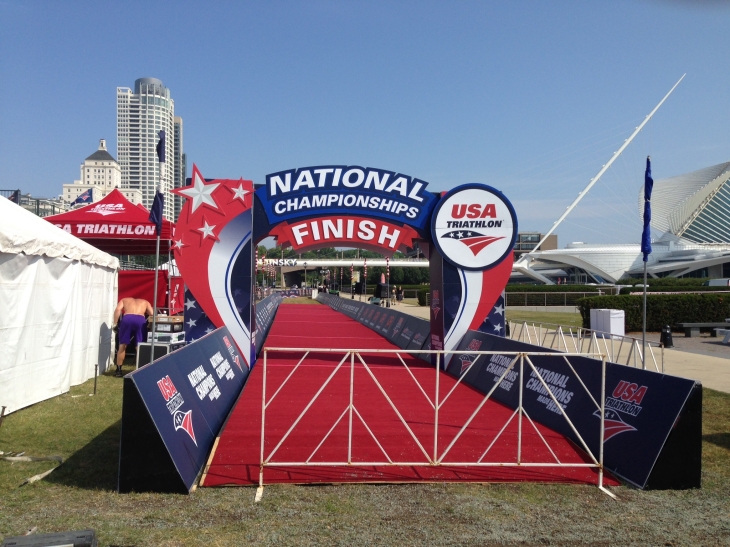 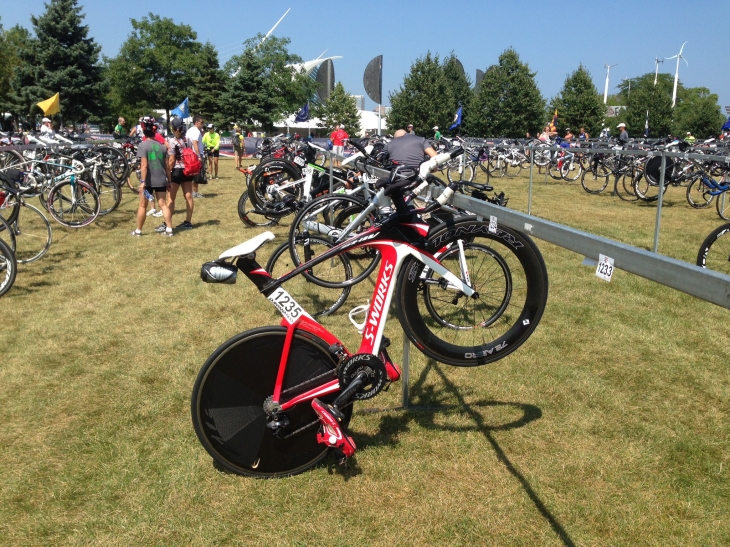 The race steed is checked in and ready to go!

The race was split into age group waves, with a healthy gap of 10 minutes or so between the waves – this meant you wouldn’t be catching a ton of people from earlier waves, and also that no one would be catching you. Mine left at 8:04 a.m., which was enough time to rid myself of any fog from the previous evening’s wine bar, and soon all 200ish of us were off. It was pretty crowded, as we all had to funnel through a narrow gap after a couple hundred meters.

I almost always feel tentative in the first part of the swim when it’s crowded, but as things thin out I’m able to focus on stroke mechanics, so in the second half of the swim I started reeling a few guys in (as well as women from a previous wave). I wasn’t clocking my swim, so as I hit the exit ramp I didn’t know what the time was – the ramp was steep and slippery, so all I worried about was getting up without taking a spill. It was a fairly long run to T1, whereupon I had trouble finding my bike – I was in the right row but passed it before realizing my mistake. That cost me about 30 seconds, which is nothing in an Ironman but costly at this distance.

Out on the bike course, and it was hammer time. Well, initially it was time to pass a bunch of slower riders from prior waves and also faster swimmers from mine without drafting or blocking. The speeds were amazing on this flat course – I was over 25 mph on a lot of sections. The first slow section was a bridge, and that’s where I started a little age group battle with a few guys who were riding in kind of a pack. I passed them on the uphill, then they re-passed me on a sketchy section where they had us zigzag to the left for a while. Per the rules, I had to drop back beyond the draft zone, which I did, but then I just kept the gap for a while and watched them continue to ride as a pack. This was starting to piss me off, but I was also reeling them in by just holding my power numbers, so I amped it up in order to pass all of them quickly – went from about 240W to 350W or so for that period – and that pass held for the rest of the bike leg.

Once more up the bridge on the way back, and T2 was just around the corner. I did a nice dismount and hit the line in just over 1:02, which is my fastest 40K split in a triathlon by about 2 minutes. No time to celebrate, though – there was a run to do!

My T2 was decent – I opted not to put on socks to save time – and I was off and running, hunting down every 50-54 calf I could find. I looked at my watch a half mile in and was running about 6:15 pace, and I could hear footsteps and breathing behind me. The guy came up next to me and asked what the race time was and what pace I was targeting. I could see that we were 1:34 into the race at that point, which meant around a 2:12 if we could run a 40-minute 10K. The guy acknowledged that and moved ahead slightly, going a pace I wasn’t comfortable in challenging at that point.

I noticed, though, after mile 3 that the guy was coming back to me, and somewhere around 3.5 miles I pulled up next to him. He seemed a little surprised. I gasped out a laugh and said, “yeah, I’ve been tailing you.” Then we ran together and were flying past women and 60+ guys from earlier waves, and only occasionally passing a fellow M50-54 guy. I had no idea where I was in the age group, so I told myself just to keep redlining it. The field was getting pretty thin as we approached mile 5, and by this time I was leading the other guy and looked back to make sure I wasn’t pulling anyone else along.

At mile 5 I decided it was “go time.” Just go hard – if the guy comes by you, so be it, I told myself. The discomfort level was high, but I could see some more guys in my age group ahead, and I reeled each of them in. We were getting close the end, and with maybe 200m to go, I saw one more guy in my age group and surged hard to pass him. He tried to go with me for a moment, but I was going a lot faster, and I hit the line in 2:12:57 with a 40:05 10K split. A PR for the Olympic distance by almost 2 minutes – YES!

My body’s initial reaction was to almost heave in the finisher’s chute, but that urge quickly subsided, and I realized I felt fine. I headed over to the VIP tent (for some reason unknown to me, I had been given access to the whole VIP experience, which was awesome and completely unexpected) to refuel and sit in some NormaTec compression boots.

My finish time would win or at least get top 3 in a lot of local triathlons, but in the national champs it was good for 32nd out of 192 finishers in M50-54. The top 25 got Team USA slots to compete in the World Championship in Chicago next year, and I was about 2 minutes shy of the mark there thanks to my swim: 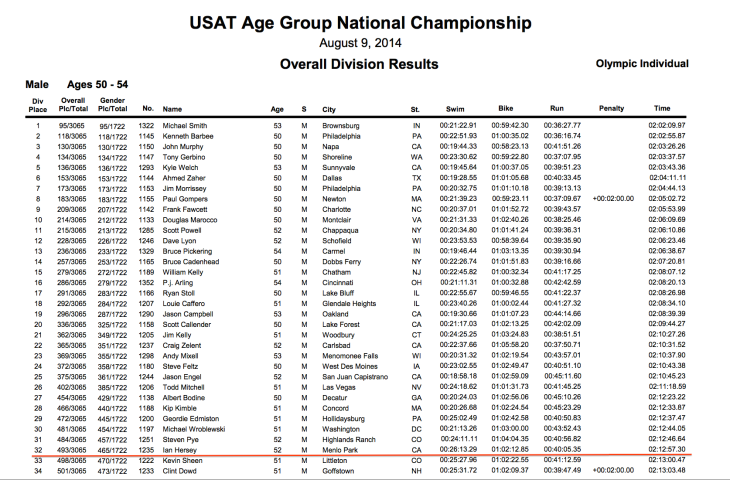 I’m happy with the result; I raced as hard as I could and as well as my fitness allowed. My rookie mistake in T1 wouldn’t have changed much – it might have cost me 4 or 5 places but not a Team USA slot. And I know what I need to work on if I want to be competitive at the shorter distances (hint: it involves water).

And it was a great weekend in Milwaukee hanging out with friends and teammates, eating German food and frequenting the Indulge Wine Bar. The championship is returning there in 2015, so until next year, I hope!