Giving advice is easy; taking the advice you so freely give is a lot more difficult when it applies to yourself.

My lead-up to Challenge Rancho Cordova was a week of a nasty cold – my first in at least two years – along with two airplane trips across the country, and not the best diet or sleep. Wednesday through Friday were the “height of misery” days, which made me dubious that I would even drive up to Sacramento on Saturday to pick up my race packet.

But as these things go, I woke up Saturday morning feeling human enough to go on an easy spin with the team and test out my race setup on the bike. So the drive up to Rancho Cordova (a suburb of Sacramento that looks like a technology park with housing developments and color-coordinated strip malls thrown in) was on; the plan was to see how I felt on Sunday morning before deciding to dive in and actually start the race. IF I did end up racing, I told myself, I would do it at Ironman race pace instead of the higher intensity I would normally do in a half Ironman. The objective of even doing this race, I reminded myself, was to mimic Ironman Arizona conditions and race setup.

Sunday morning had me feeling decent enough to start the race, even though I still sounded terrible. My coach Tim was there to spectate and questioned why I was even doing this. “I feel better than I sound” was the only thing I could come up with. Conditions were really nice, actually: calm 68F water, perfect for a fast wetsuit-aided swim, and though the day would get very warm indeed by the run, the first couple of hours of the bike were doing to feature ideal air temps.

A relatively small field combined with age group waves made for a very civilized start, and after the first couple of hundred meters of adrenaline-fueled strong pace, I settled into a moderate, Ironman-type effort. Swimming when your nasal passages are congested is quite an interesting experience – the activity itself already produces enough hypoxia that you don’t really want any additional difficulty getting oxygen in. I didn’t feel exactly panicked at any point, but I did stop briefly a couple of times to clear my nose out a little (no further detail necessary). My left calf also cramped a few times, which I guessed was due to the dehydrating effect of all the decongestant I’d been taking. Fortunately, I swam a pretty straight line, so I exited the water with an average swim time for me that turned out to be 34:02 (I wasn’t clocking it on my watch).

I spent too much time in T1 fumbling to get into my tight long-sleeve top (sun protection), so that was a good lesson and “opportunity for improvement” for Arizona. Once on the bike, I felt pretty good other than fatigued arms and shoulders (note to self: more swim time!). The first half of the ride was mostly rolling and a net uphill, with a couple of climbs that forced me into the small chainring. I was averaging around 215 watts for that part, which is slightly above my Ironman target effort. I did allow myself to spike well above that for short sections on the steeper climbs but otherwise held myself in check. The first aid station was, uh, interesting – for some inexplicable reason they had set it up near the bottom of a long downhill, so the chances of successful bottle handoff when riders are going 30 mph was practically nil. Oh well – I still had plenty of fluids at that point.

After 25 miles, the climbing was pretty much over, and the course had a net descent of about 600 ft over the remaining 31 miles, which meant fast riding for less wattage – I averaged over 23 mph on this part with only 186W of average power. That allowed me to focus on hydration and electrolytes, and I came to the end of the bike feeling reasonably good, although a little hungry (the aid stations only had enough volunteers to hand out bottles, so my only calories came from the one gel I had in on me). My bike split was 2:35, which I think equals my best half-Ironman split ever, even though my average power was Ironman effort. All that says is that the course was fast. 🙂

I had debated about ending my race as soon as I got to T2, but I decided to see how I felt. Since the course was two 6.5-mile loops, I told myself I could always stop after the first loop. Here’s where the voice of the coach and the voice of the athlete were at odds – if it were one of the athletes whom I advise, I would have told them in no uncertain terms to stop after the bike. The competitor in me, though, doesn’t like DNFs. The competitor won round one. 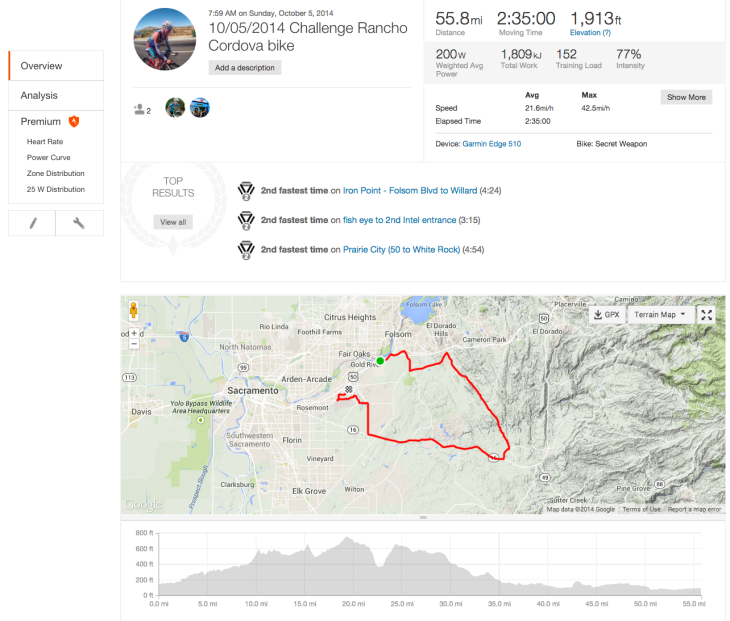 Once out on the running course, I tried to run relaxed. The legs felt good and wanted me to do some quick turnover, so I started out at around 7:00 pace. Pretty soon, though, I felt as though I should back off – I was still pretty congested and coughing a bit. Through 3 miles I was averaging 7:15s, but I also realized that I was violating my rule about not digging a hole for myself. Right then and there I decided I was going to be done after the first lap, and at that point I started running an easy 8:15ish pace and walking the aid stations.

What did we learn? A few things:

As somewhat of a sliver lining to the DNF cloud, the organizers let me switch to the Aquabike division after the fact, which I apparently “won” (they still gave the official awards to those originally entered in the division, which is fair enough). I love customer-friendly flexibility! Thanks to Challenge for creating the event, and special thanks to USA Productions and SVE Timing, who actually made the event happen.

I have some work to do before Ironman Arizona. The first “to do” is to get healthy! The second is to listen more to my inner coach. 🙂