So goes the title of the second such email I’ve received this year from United. 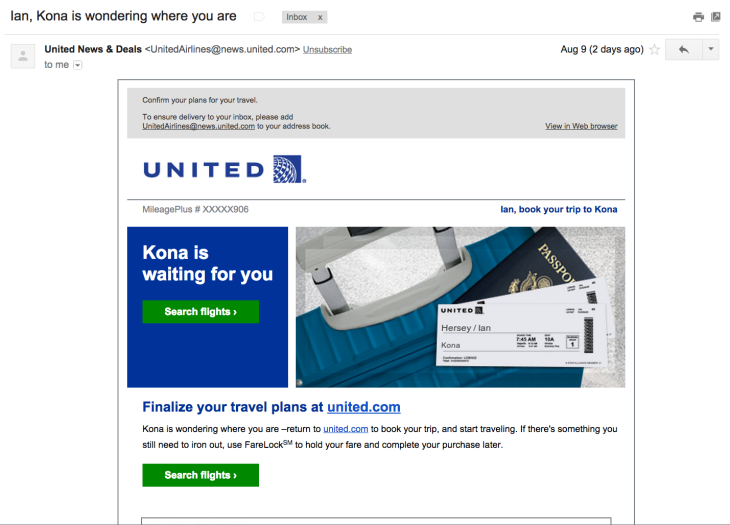 The thing is, I have a trip booked to Kona already…on United even.

Last time I got an email with this subject line, I had two trips booked to Kona on United (one for the Hawaii 70.3 race back in May, and one for Kona in October), and they were in fact the only upcoming trips I had at the time.

Somewhere at United, the left hand doesn’t know what the right hand is doing.

As ridiculous as this scenario seems, it happens all the time, and the problem isn’t unique to United Airlines. Marketing automation systems attempt to do personalized campaigns in order to get a better response rate. But they lack two central ingredients:

In fact, if they were smart, they’d be making me offers for business class fare to Klagenfurt, Austria next summer, seeing as (a) I’ve signed up for Ironman Austria, and (b) I likey my business class as long as you give me a reasonable deal. True personalization like this is something we’ve worked very hard on a Saffron with our autonomous learning platform, and we have some very good proof points in accuracy of individualized product prediction. We co-presented on this with our customer USAA at Wharton back in April. “Cluster of one” personalization is just in its infancy, but with the IT industry on its way to adopting technologies that solve the two challenges above – low-latency updates from transactional systems and intelligent systems that can treat all of us like the individuals we are – we shouldn’t be surprised to see the marketing of the future become “scary good.”

Meanwhile, back in the present, two days after I booked my trip to Phoenix for this November’s Ironman Arizona race, I got this: 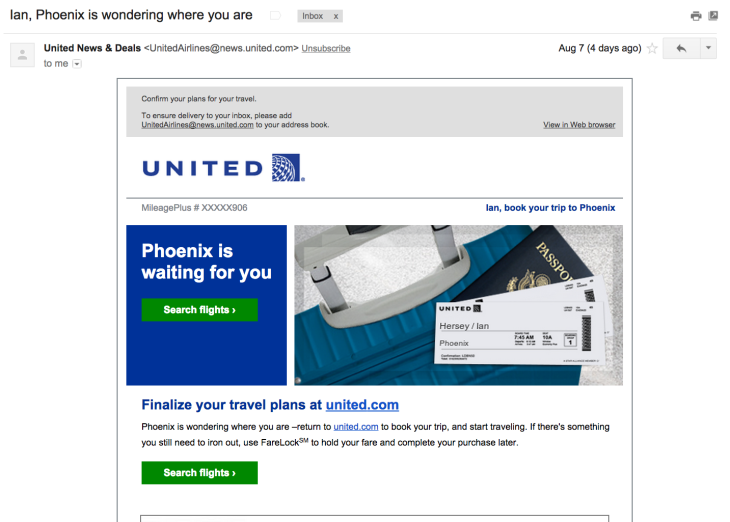