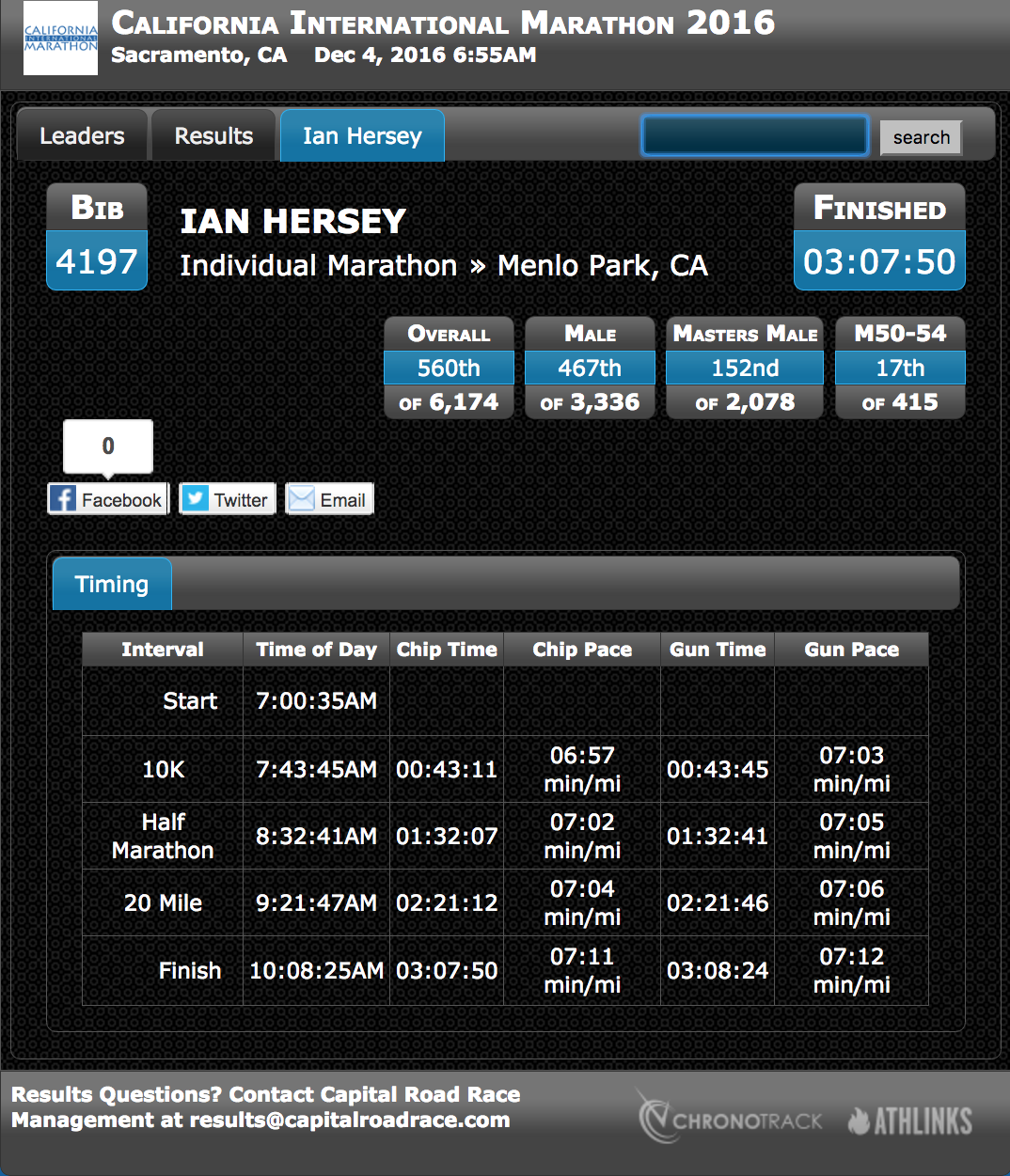 It’s been a long season, with a mixed bag of results. The highs were few — a PR and podium finish at Vineman 70.3 — and the lows, at least compared with past seasons, were numerous: DNFs at Honu 70.3 and Superfrog 70.3, and less-than-stellar finishes at Ironman Coeur d’Alene and Ironman Arizona. That doesn’t mean the year was a disaster — I had a lot of fun training, and my Coeur d’Alene experience was really about being there for my friend Jim’s first Ironman, so that part was a success all around. But this year my run really let me down a number of times, and seeing how running has mostly been one of my strengths, that’s kind of hard to take. At 54, this year more than ever I’ve noticed the decline.

But a great thing happened this year as well. In addition to my triathlon team, Team Sheeper, I’m also part of the Excelsior Running Club based up in San Francisco, and have been for about 15 years. I haven’t been that active the past few years, as triathlon season and important races are hard to balance with competitive running races, but we had a great organizer this year — Nakia — who tirelessly rousted dormant team members, coaxed and cajoled via email and other means, got me to actually race three 5Ks and two half marathons in the middle of triathlon season (sometimes the day after a long ride, which trust me is not the recipe for a fast time), and the end result is that both the male 40s and 50s teams find themselves in first place in the Pacific USATF road racing series.

The capstone of that series is the California International Marathon, which is important because (a) it’s much more difficult to field a full team (which needs three runners in order to score) of 50+ guys, because, you know, we’re old and fragile, and (b) it’s a double-points race, which means it counts for a lot. My last time here was 2009, eight weeks after my very first Kona, and at that younger age I was able to scratch out my last sub 3:00 (barely — a 2:59:54). This year’s was only two weeks after Arizona, so I had no real idea of what to expect in terms of time. My last open marathon was 2011 when I did the Boston-Big Sur double (3:03 and 3:04, which showed at least that I could recover decently in two weeks), but then again I’m five years older now and my runs this year weren’t that great. I told Nakia I’d be happy if I broke 3:20, and I meant it.

In the meantime, my recovery from Arizona consisted of doing a little swimming and crewing for Rob Gray at Ultraman, which was an awesome experience. It did involve some running, but it was mostly short sprints to hand off fluid bottles as he was riding by at fast speeds, but I did notice that my legs felt pretty decent. The following Tuesday I did a 5-miler at the Old Kona Airport that involved two quickish miles to see how the legs liked 7:00 pace or faster, and that went pretty well. So all in all my confidence was increasing that race day wouldn’t be a total disaster. Still, two miles at race effort is a long way from 26.2.

Given the unknown of how my body would react to both the residual fatigue and a pace that I hadn’t done any really long runs at, the question was what my race strategy should be. My feeling was that I should be conservative and go out at 7:15-7:20 pace through at least midway and then pick it up if I felt good. I discussed this plan with my teammate Cliff the evening before over a pre-race Indian meal (yes, really!), and I got the impression that he thought I was maybe selling myself a bit short. Plus there was my ego — I’ve only run two marathons slower than 3:09:50, one being my very first one when I was young and stupid (I’m no longer young), and the second being one in which I paced my brother-in-law through his first marathon — so I started thinking maybe I should think about holding 7:10s, which would get me around a 3:08 and keep my record intact. So yeah, I started getting greedy.

That said, my two sub 1:30 half marathons run shortly on the heels of long bike rides did at least provide some empirical validation to my plan (the old “double your half marathon time and add 10 minutes” rule), but that approach implies that you have sufficient training mileage for the longer distance. Here’s what my run volume looks like for the past six months: 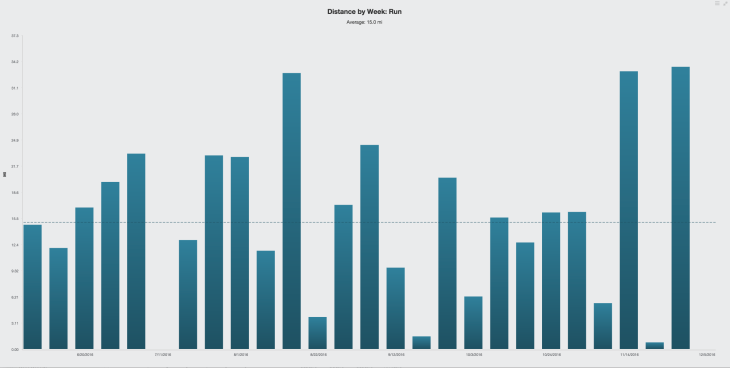 That’s right — 15 miles per week average, and the only weeks over 30 miles were those that included an Ironman. No running coach would recommend a program like this.

I had a few things going for me, though:

The race had pace groups oriented around times two minutes faster than the Boston qualifying marks (since that was the gap you needed this year to get in); I wasn’t so concerned about that since my qualifying time of 3:40 is easily within my capabilities (there are certain benefits to being old), but 3:08 seemed perfectly aligned with my revised goal for the day. The race started, and it took my group about 30 seconds to cross the start line, so I started my watch then. The 3:08 pacers were a little quick to start with, taking us out in 7:03 (vs the 7:10 you need to hit 3:08) and then following that with some sub 7:00s. The course is pretty rolling in the first half, so you expect a little pace variation, and in my case my legs felt very good and the effort felt very controlled aerobically, so I went with it. At the first aid station before mile 3 I pulled slightly ahead of the group, remembering how crowded it got in 2009 trying to get fluids when you’re in the middle of a pack. That felt fine, so I basically kept rolling at just under 7:00 pace average — sometimes a little faster, sometimes a little slower.

The effort level to maintain this pace, however, was hitting an inflection point. Mile 20 (2:20:53, or just under 7:03 average) was my last mile at 7:10 or faster, and even though I felt positive mentally, physically I was slowing despite putting out a lot of effort. My quads were very sore by this point, too, so every footstrike hurt. Not bad at first— mile 21 was a 7:15 — but each subsequent mile became that much harder, slower and more painful. 7:26, 7:27, 7:38. With 2.2 miles to go at 2:50:40, I basically had 19 minutes of breathing room, so all I needed to do was not cramp. My quads and hamstrings were tingling, though, in that “I’m about to cramp” sort of way, so I just tried to change my running form up a bit and take some of the pressure off by leaning forward a bit and making sure my foot was striking underneath my body.

Mile 25 was a 7:25 — good! Just keep it going, I told myself. But that last mile was awful; I felt like I was running in slow motion through quicksand. The 3:08 pacers caught and passed me, but weren’t pulling very far ahead, and the road signs helped count things down — “a half mile to go,” “400 meters to go,” “200 meters to go!” I don’t remember very much except turning into the final straight, seeing 3:08:xx on the race clock and hitting stop on my watch after I crossed the line. 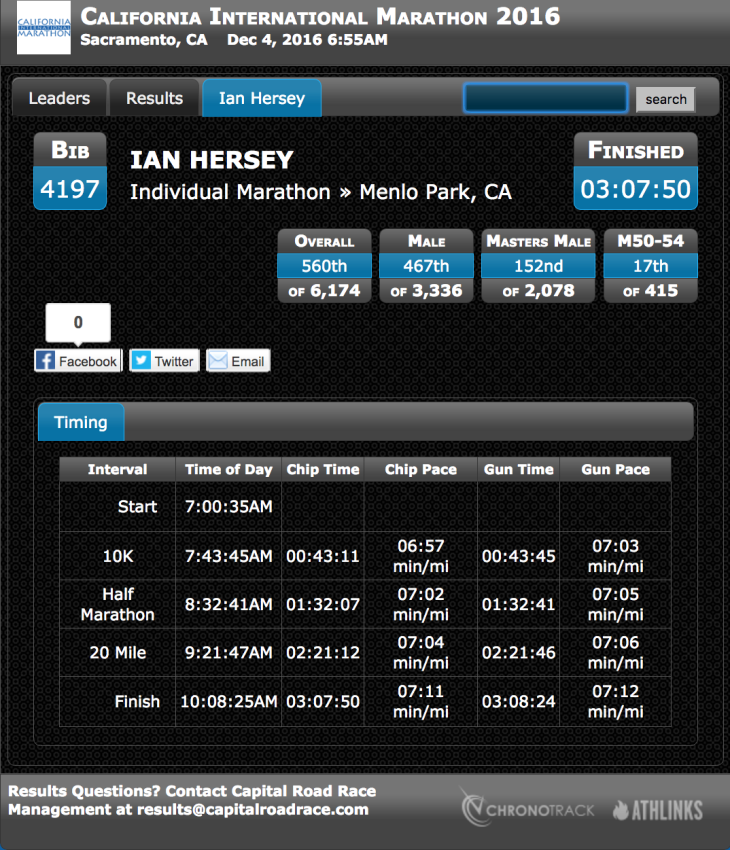 I am beyond happy with the result, and it was a nice surprise for my team as well. “Underpromise and overdeliver,” to quote what’s now a cliché in the business world.

But there’s a basic truth in there somewhere, particularly as it relates to teams. I always seem to race that little bit better and try that little bit harder in workouts when I’m doing it with and for others beyond myself. If I look back at my best memories from this past season, they all revolve around training sessions with my teammates or races in support of not only myself but others — Jim’s first Ironman, the Hana Relay with my Maui ohana, Ultraman, and now this.