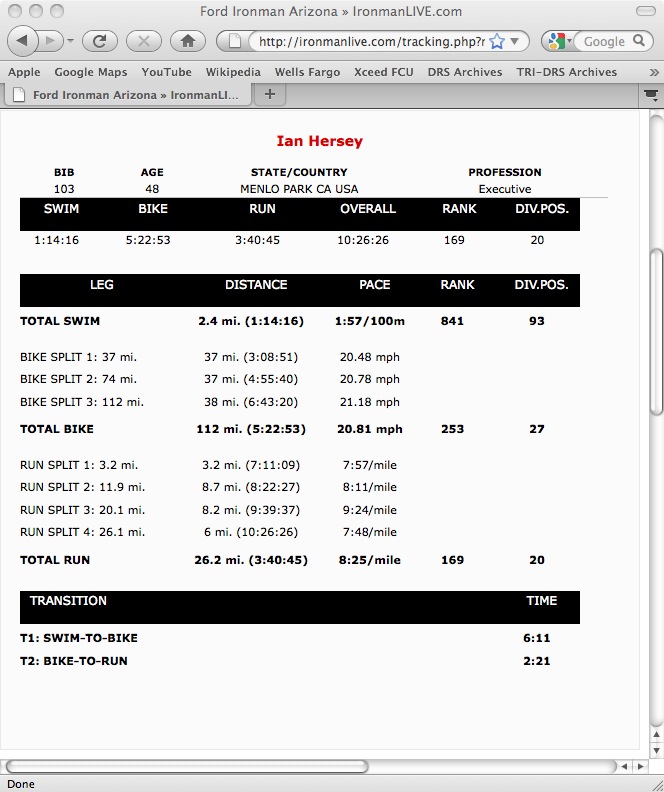 PR by 5 minutes and bike PR by 14 minutes

This was a 5-minute PR for the Ironman distance and my ninth Ironman overall, but what I’m most stoked about is a 14-minute PR for the bike.  I also won the “46 and over” category in the Ironman Executive Challenge, which got me a Kona slot for 2011 – hoping Lance Armstrong shows up for that race.  🙂

Like every race of this distance, there are a thousand stories, most of them boring.  It’s a long day, so lots of little things go right and wrong.  You are guaranteed to have high points and low points.  But most of the story, actually, is in the training leading up to the race – that’s where the hard workouts are done, many of which no one else sees but you – the 3+ hours on the bike trainer in a hot garage, the hours on the dryland swim trainer to build shoulder strength, the hard solo runs after the group bike ride where everyone had hammered the hills, the endless sets of planks and lunges to build core strength.  Those sessions are where your race is made or broken.

Anyway, I had done the work, so the plan on race day was to put it to the test.  This was only my second race of 2010; in the spring, I had a persistent hamstring strain, which kept me out of the Big Sur Marathon, and a planned appearance at the brand-new Ironman Regensburg in August was canceled due to some work stuff.  So other than a sprint tri back in May, IMAZ was my only showcase for the entire year.  I wanted to make it count.

I almost blew it in the swim; I lined up on the far right on the “wall,” which would have been ok if I had gotten myself closer to the front.  But the wall area was crowded, so I thought I’d let the pack go and then swim through it later once it had spread out – that worked well in IM Austria a couple of years ago.  Big mistake.  All it meant here was that I had a bunch of slower swimmers in front of me once I set off (two minutes after the gun), and it took a while to get past them.  Not a good strategy.

My other rookie mistake was wearing the wetsuit I got a great bargain on at the Ironman shop the day before – a beautiful 2XU creation that I got for half price.  It fit perfectly and all, but I hadn’t noticed that there was strip of cloth over the Velcro closure to prevent its snagging on anything else, and that meant that my wetsuit didn’t really close.  About 2/3rds of the way into the swim, I felt some water coming in the top, and I had no idea why – I thought the zipper was coming down.  Fortunately, it stayed up, but it was on my mind the rest of the swim. 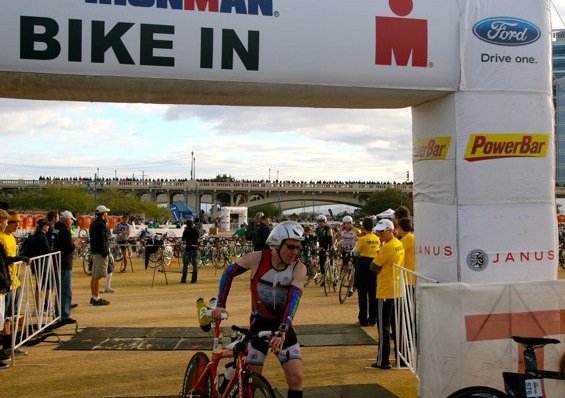 Once out on the bike, I settled down and found myself cruising the “out” portion of the out and back pretty fast – as fast as 28 mph.  That could only mean that we had a tailwind, so there would be a pretty good headwind coming back.  Sure enough, that was true, and it seemed to get stronger on each of the three loops.

I was going by power anyway, so I just kept myself down in the aerobars and cranked away.  I noticed after the first loop that I was holding close to a 21 mph average, which is about 1 mph better than I had ever ridden in an Ironman.  What’s more, I felt great and well within myself. 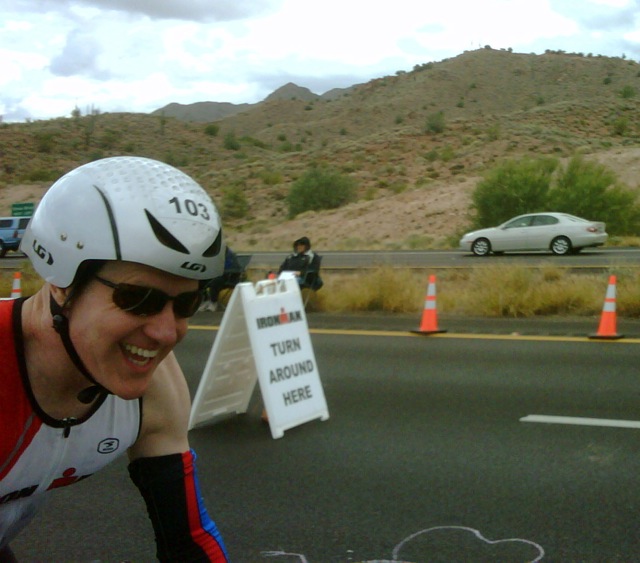 On the second loop came my first dilemma – pee while on the bike or stop?  Warning:  possible TMI coming.  I had never tried the “peeing while moving” thing before, but since I was on a good ride, I didn’t want to lose time.  The problem was that you’re normally supposed to do this on a downhill when you can coast; the downhill in the race was into a headwind, so there wasn’t much coasting to be had, so I took the opportunity to try it on a false flat on the uphill with the tailwind.  Get off the saddle, stop pedaling, move to one side, and relax.  Ahhhhh!  Douse yourself with water, and Bob’s your uncle.  That was so successful I did it four more times during the ride.  🙂

That business aside, I was still holding my pace and even surprisingly caught a teammate of mine who’s a really strong swimmer and cyclist about 5 miles from the end of the bike.  I almost flubbed my good day, though, while getting ready for the bike-to-run transition – I started pulling my feet out of the shoes and putting them on top so that I could do a quick dismount, and when I got my left foot out, my leg started cramping and I couldn’t get my foot on top of the shoe.  This started a comical series of attempts, where the shoe was hitting the ground and almost either coming out of the pedal or causing me to crash, but I finally got it right.  Not my shining moment. 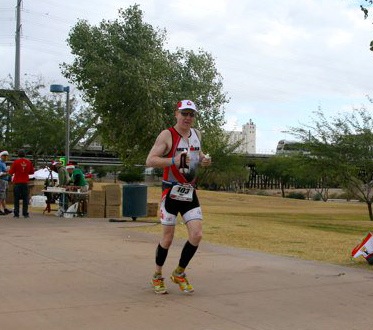 Coming off the bike, I was happy with my time – I was getting onto the run course about 15 minutes faster than I ever had, so I knew a PR was possible – but I wasn’t happy with how my legs felt.  There was no oomph.  I settled into a manageable 7:40-8:00 pace, and was running along with my teammate Jeff (the one I had caught on the bike) for probably 5 miles or so, during which point we were both passed by the 2nd-place woman Linsey Corbin, who was a loop ahead of us.  The one long uphill of the loop came, and I fell back while the 3rd and 4th female pros went by me (3rd I didn’t recognize, but 4th was Leanda Cave).

I was now running 8:30s, and really starting to hit a low patch.  A few pit stops ensued, thanks to my good hydration strategy (plus a two-minute stop to read the Wall Street Journal in the port-a-potty :-)), but otherwise I kept motoring along as best I could, knowing that it probably wouldn’t get any worse and might get better.  At the end of the second of the three loops (17 miles in), I did some quick math and saw that I could still break my PR as long as I could hold it under 9-minute pace.  That became my mission for the rest of the race. 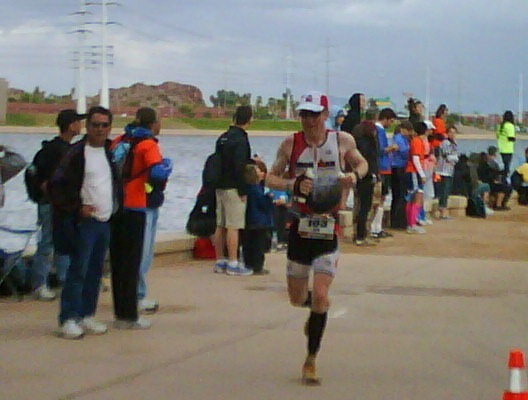 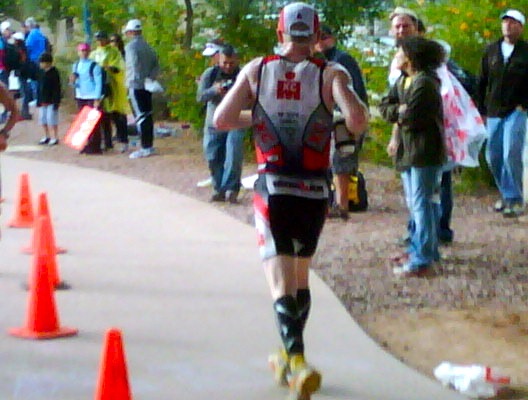 Two miles later, I caught up to Jeff, who was now walking.  Not good – once you start walking in an Ironman, you’re done.  I was starting to feel better and was able to pick it up a little – I figured every 30-45 seconds per mile under 9:00 I could put in the bank would give me a buffer if something bad, like a cramp, happened.

With two miles to go, I was really working it but also running a lot faster than I had done the rest of the race – I always do that when I’ve got something left and “smell the barn.”  The 8:30+ pace had become sub 7:30, and I was passing a lot of people.  At about mile 25.5, I caught up to another Executive Challenge guy, Adrian, who was in a younger age group.  As I went by and said “way to go,” he asked me which loop I was on.  “The last,” I grunted out.  All of a sudden, I could sense there was someone on my heels.  Damn, I thought – I’m going to have a sprint finish in an Ironman.

I led through the series of turns that took us to the finish line, and I was running sub 6:30 pace at this point, at least according to my Garmin watch.  I didn’t know exactly where Adrian was, but that became clear when he rocketed past me in the final 50m to gap me by two seconds.  But that’s cool – I still got my Kona slot, since he wasn’t in my age group, and I got my PR.  Adrian didn’t look so good when I went up to congratulate him – they carted him off in a wheelchair to the med tent.  Lesson:  you can outsprint the old man, but it’ll cost you.  😉  Seriously, though, it was fun to have a little testosterone-fueled contest at the end of a long day, even if I was on the losing end. 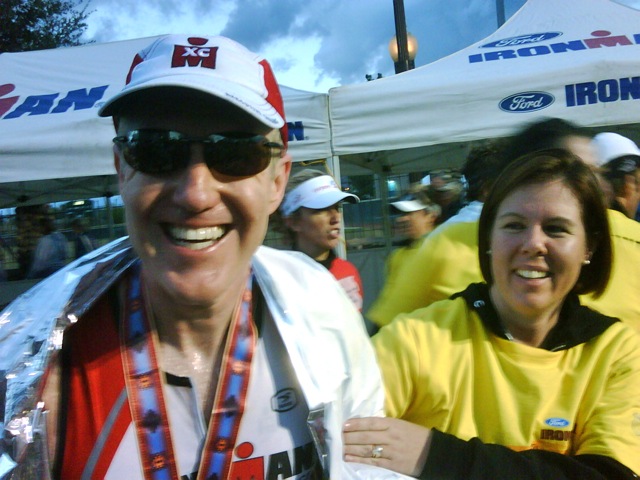 So I got my PR and my Kona slot for next year, which means I can build my season around the event already being in the bag.  What’s more, I’m finally happy with my bike – my bike time ranked higher in the age group than my run time, which is a first.  That means my transition from runner to triathlete is almost complete.  Still gotta work on that swim.  But for now I’ll celebrate – once I recover, that is!  🙂 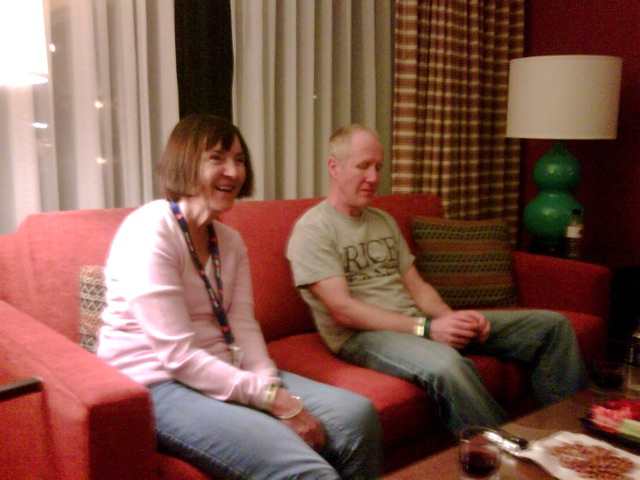