I confess with both my readers as my witness: I’m not a big fan of aerobic base building. Like a lot of things I know are good for me, I know I should be doing it before I move into the fun stuff — intervals and threshold — but I just find it mind numbing. Particularly the long aerobic ride. Particularly solo.

But one needs to work on one’s “limiters,” as the data-driven endurance coaches say, and one of mine is definitely cycling endurance. Other than Ironman Arizona 2010, all of my Ironman rides have been far below what I’m physiologically capable of doing. It doesn’t matter that you’re a decent runner if you lose 30-60 minutes in the bike. What I did differently in 2010 was do some well-timed volume on the bike in that high Zone 2 / low Zone 3 area, so that seems like something I should get back to.

To kick off the year in style, I’ve been following the Spinervals Super 6 program. I’ve been a Coach Troy fan for many years and got a chance to meet him in person at an Ironman breakfast in Kona this past October, though of course I felt like I already knew him thanks to many hours of suffering through his workouts in my garage. Basically, the program is six weeks of six rides per week with running and strength work thrown in for good measure (it doesn’t address swimming — for that you’re on your own). During the week, it’s got a mix of intensity (my fave) with steady aerobic work, but the Saturday ride gets long. Today’s was very long indeed — 100 miles in about 5.5 hours, for those hardcore types who can stay on the trainer that long. Short option was 3-4 hours. I enlisted the company of my good friend and teammate Mike, who like me has Ironman Arizona on the docket this year.

It started fine and controlled, but in the second set the intensity went up, and the gearing Coach Troy was using seemed too high on the fluid trainers we had — I hit over 300 watts in the last minute of the first repeat. This is higher than I can even maintain in a sprint distance triathlon, so well above lactate threshold. My heart rate never really recovered from that; where my aerobic efforts had been below 130, I was consistently staying above 140 for much of rest of the workout, which meant I had burnt a lot of matches during that set. Effectively, I bonked and made it to 3 hours only by force of will.

Looking at the workout in TrainingPeaks, the graphs tell the story. In the bottom graph, you can see the correlation between heart rate and power as the workout goes on; in the third hour, the power goes down but the heart rate stays high. In the scatter graph (one of the new beta features I have access to), if you plot power and heart rate data points, you see a wide fan-out of power and heart rate at the upper end of the X axis (heart rate); normally you would expect a smoother upward trend on both axes. 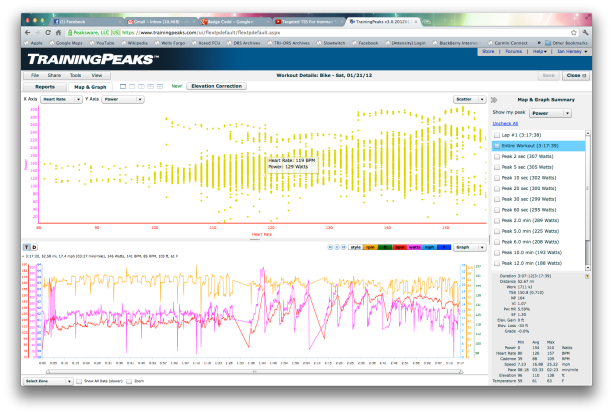 What this tells me is that I have a lot more long aerobic work to do, and it also illustrates what happens when you go into the red zone during a long aerobic effort — you burn enough matches to end your day prematurely.