By some measures, I should be disappointed in my Hawaii 70.3 (“Honu”) result — I got 9th in the M50-54 age group as opposed to 7th last year, I failed to break five hours, and my body betrayed me in the run, which is supposed to be my best event:

But I like to take an analytical approach to my racing. Let’s compare some numbers:

Now, Alexander is not the cyclist that Lance is, but he is a much better runner, and is a three-time winner of the full Hawaii Ironman to boot. So a winning time almost 15 minutes slower than last year is perhaps an indication that the conditions were more difficult this year.

This isn’t a complete analysis of everyone who competed in both years of course, but it does look at a female pro and a couple of top older male age groupers, and then at me. A couple of things emerge from the numbers:

It’s not clear to me exactly why the swim was slower, but they did reverse the direction of the course this year, which might have been a factor. I was faster this year than last, but I’ve been swimming a lot faster in workouts this year, so should have been several minutes faster. For the run, it’s crystal clear why it was slower: it was HOT! Last year’s race had some very strong winds, which kept the temperature down.

My own run performance came down to the fact that my run training has been next to nothing since mid April when I strained my hamstring, forcing me out of my planned Big Sur Marathon and making the prospects of even getting through the Honu run iffy at best. Fortunately, the hamstring healed after four weeks, but the damage was done to my run fitness. But that isn’t an excuse — I came with great overall fitness and confidence, and was ready to race.

The swim started well — I placed myself on the right side of the field and swam un-punched and un-kicked for the entire time. The change that the race organizers made to start the age group women seven minutes after the age group men really helped. Fewer bodies, fewer arms and legs. It also made a big difference on the bike, because in years past I’d have to pass a lot of women who were fast in the water but clogging up the bike course (no offense intended — I know I could also solve the problem by “swimming faster”). The only tough part of the swim was after the final turn buoy, heading back to shore — that’s where the wind was coming from, and the chop was noticeable. The sun was also right in our faces, so it was difficult to see where the swim finish actually was.

Once out, though, I noted the time (a little disappointed, but you don’t dwell on a minute or two in such a long race) and headed up the ramp for T1. Though I needed help from a volunteer first to get my swimskin unzipped – the zipper was stuck. She had trouble as well, but eventually got it to unzip. I sprinted up the hill and found my bike, and made one of my faster transitions, other than fumbling with the shoes I already had in the pedals (the course goes sharply uphill right out of transition, so it’s tricky to jump on the bike without your shoes already on your feet — something to practice). Once off and going, I started passing guys (and a few really fast female swimmers) pretty quickly. The wind was going pretty fiercely and was mainly a crosswind, which requires a bit of nerve to ignore and just stay down in the aerobars in.

I was holding around 210-220 watts for the first hour, and averaged about 22 mph. Then the climb to Hawi came, which involves not only a long uphill with a few steepish parts but also a pretty good headwind. At some point near the turnaround, a fellow Wattie Ink guy passed me, but I caught him on the ensuing descent, which was blissfully free of the dreaded crosswinds this year, which meant I could cruise pretty easily in the aerobars at 30+ mph, regaining a lot of the average speed I had lost on the uphill. The Wattie guy and I were exchanging positions every so often, as I would push the uphills a little harder than he did. He turned out to be a younger guy named Dillon, whose dad John was also a racing Wattie (John passed me in the run — it would become a theme).

On the section back to Kawaihae and the Queen K, I continued picking off people, including a few female pros and one or two female age groupers who were swimming and riding like pros :-), but I stopped myself short of really hammering — that’s what makes the power meter such a great tool if you know how to use it. I knew I was on my way to a good bike split, however, and sure enough I ended up notching a four-minute PR for the course. I also noticed very few bikes in the transition area, especially anywhere near my number, which meant I was doing pretty well in the age group (turns out I was 9th off the bike). But now I was venturing into the unknown — the longest run I  would have done since February or March.

It started off well enough, though immediately I could tell that it was substantially hotter than last year. The key was to keep my hydration and electrolytes going, as cramping in the heat is pretty much my standard MO. I had to reset my Garmin because my Auto Multisport mode apparently didn’t have transitions included, so the watch had stopped recording. I use the Garmin for pacing — mainly to hold myself back early on. The first mile was still a 7:0x, but it felt easy enough. That would change pretty quickly once I hit the sections on the golf course, where the spongy grass sucked all speed from the legs. Somewhere in mile 4, the first little leg cramp happened, but I took care of it pretty quickly with some water and an electrolyte cap. I had taken roughly 6-7 of those on the bike, and in hindsight that probably wasn’t enough.

Saw a few Wattie teammates out on course: first, the young Dillon that I’d been playing leapfrog on the bike with passed me in mile 3, and I didn’t think there was any way he was coming back to me. Then, by surprise, his dad John passed me in mile 4 and introduced himself. I kept John in sight for a while, and even re-passed him in mile 7 (after having my first solid set of leg cramps, which stopped me dead in my tracks). When I went past him, I joked that my teammates call me “a tenacious bastard.” Just before mile 9, as we headed out on the long, desolate out-and-back section of road, I cramped hard. I tried walking backwards, sideways — anything to use different muscles and work out the cramps. John went past me at this point and told me I’d need some of that tenacity — he was spot on.

Finally the cramps got worked out and I resumed running, until an even worse set happened 20 yards before the next aid station. It was so bad that I had to ask the volunteers to bring the water to me — I couldn’t move. I took my time, took a couple of electrolyte caps, and gradually I could start moving again. It was odd: for a few minutes I could run 7:20 pace, then all of a sudden I was stopped dead in my tracks, then the cramps subsided and I could run again. That’s pretty much how it went for the rest of the race. The last quarter mile I was determined to keep running no matter what, and almost every muscle in both legs was twitching, ready to lock up. But I finally made it over the finish line, and a PR is a PR, no matter how ugly parts of it were.

I met a few other Watties in the finishers area — here’s me with Mickey McDonald from Bend, OR, who crushed the bike with a 2:29 split:

My Team Sheeper buddies Mike and Steve finished together, also having tough runs laden with cramping, so I wasn’t alone in my suffering. 🙂 Here’s the happy crew: 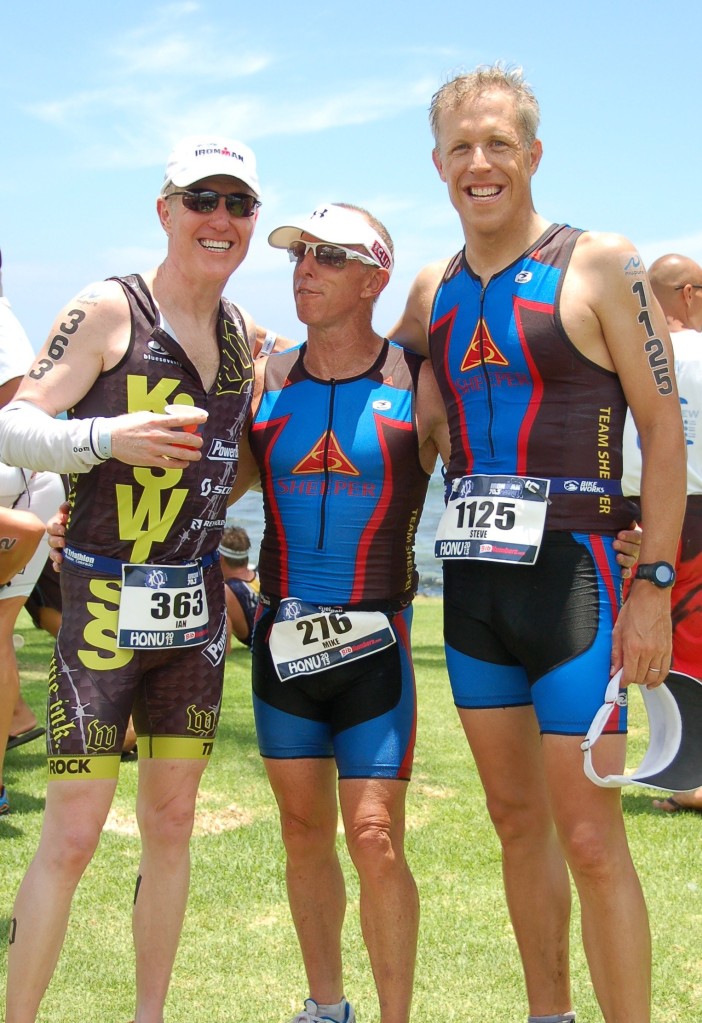 Now it’s on to my Kona prep — if nothing else, I learned from this race how far I still have to go to get my run fitness and my hydration up to the task of double the distance and more than double the suffering. Bring it on!

A big thanks to all of my sponsors: TrainingPeaks, which I use religiously; Wattie Ink, which represents a great set of product sponsors and athletes (and has a very cool-looking kit); and, last but not least, Team Sheeper, the greatest combination of training program, training partners and friends a guy could ask for.